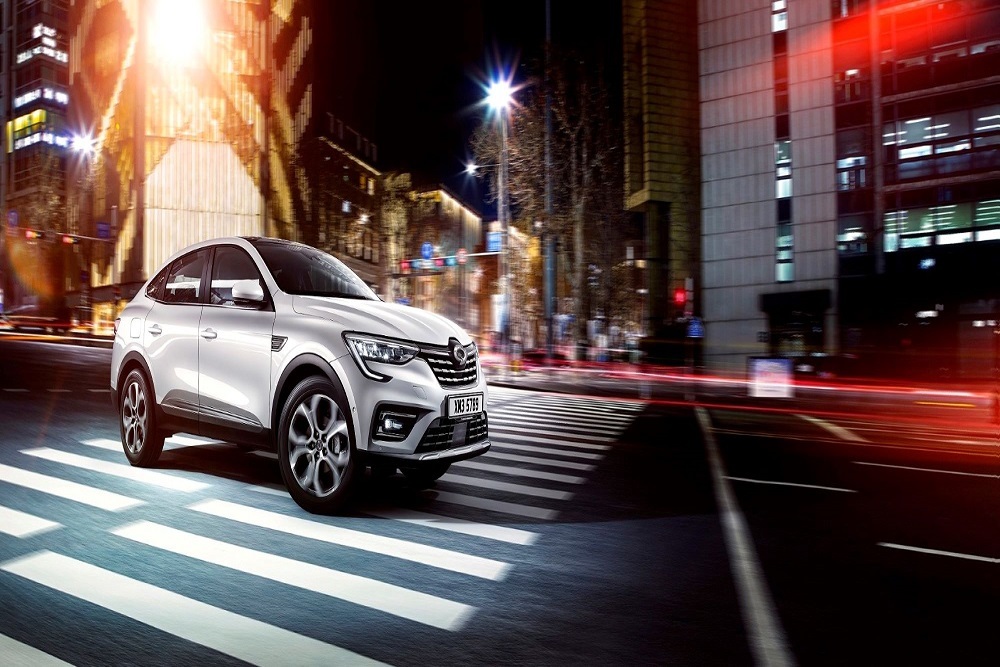 Based on the XM3 Inspire show car of 2019, the XM3 coupé SUV, the latest addition to Renault Samsung Motors (RSM), has achieved very good sales figures for its launch. RSM is the first generalist manufacturer to launch this type of concept on the Korean market. XM3 is the Korean-specific version of the Renault Arkana coupé SUV , already marketed in Russia and which promises to be a world-class model.

The launch of XM3 is part of the international strategy led by the Renault Group. XM3, produced at the Busan plant in the south of Seoul, has conquered the South Korean market since its launch.

The distinctive and upscale design of XM3, combining the charm of a sedan and the proportions of an SUV, has won over customers.

“XM3 INTRODUCES A UNIQUE CONCEPT WITH SEIZING DESIGN […] A PERFECT COMBINATION BETWEEN ELEGANCE AND ROBUSTNESS. "

Unveiled at the Seoul Motor Show in March 2019, the XM3 INSPIRE show car laid the foundation for the XM3 series model. "We adopted the elegant profile of a sedan and we raised it," explains Raphael Linari, director of the Renault Design Center Seoul. This is reflected in particular by a very high beltline and a cut roof line.

XM3 also inherits several attributes characteristic of SUVs such as its marked ground clearance, its front and rear skis and its wheel arch protection. Its 18-inch rims, chrome grille and double aluminum exhaust give it a sporty appearance.

Familiars of Renault and Renault Samsung Motors will recognize the light signature in C (C-Shape) of LED spotlights, already present on the brand's SM6 (Talisman) and QM6 (Koleos) models.

A PRACTICAL AND DYNAMIC CUT SUV

XM3 is a coupe SUV that does not compromise on comfort, space and cargo volume. Real advantages for Korean customers. "While being beautiful, based on a quality color / material treaty and displaying a unique character, the car is very practical and easy to use on a daily basis" explains Minyoung Kim, Color and Material designer.

On board, the high-tech interior is slightly oriented towards the driver with two large digital screens: a 10 '' digital dashboard (identical to that of the Renault Captur INITIALE PARIS) with navigation display and a vertical multimedia tablet 9.3 ''. Quite simply the largest screens in the segment!

XM3 also has equipment worthy of the higher segment such as parking assistance with 360 ° camera, automatic parking brake (available from the first level of finishing), adaptive cruise control with Stop & Go function, assistant active lane keeping or MULTI-SENSE technology. The latter adapts to the driver's wishes with its three driving modes and different lighting atmospheres.

The interior of XM3 puts on a subtle balance between roominess, comfort and dynamism of a coupe SUV.

"An effort has been made to ensure the comfort of the seats, the high position of which is reassuring," said Jinseok Cho, product manager in charge of the project, in Korea. “At the rear, passengers have 213 mm of knee space. Attention particularly appreciated by Asian customers. And in terms of loading, XM3 offers the largest trunk in its class with a capacity of 513 liters. "

On the engine side, XM3 benefits from the 1.3 TCe. Praised by almost 90% of first customers, this 1.3-liter turbocharged petrol engine was jointly developed by Renault and Daimler. It is associated with a seven-speed EDC dual-clutch automatic transmission. XM3 is also offered with a 1.6-liter petrol engine with X-TRONIC automatic transmission (CVT).

In terms of safety, KNCAP, the body in charge of crash tests and passive safety of vehicles in Korea, should soon certify that XM3 has obtained "level 1" (best possible result) in its ranking.

Very accessible, the new RSM vehicle offers great benefits to its customers, in the pure tradition of the manufacturer.

"In addition to its exclusive design, the excellent quality / price ratio of the XM3 has often been mentioned by our customers as one of the main reasons for buying" analyzes Jinseok Cho. "72% of the first buyers took advantage of this to choose the highest level of finish (RE Signature)"

The many advantages of the XM3 explain the success of its commercial launch in Korea. The model is expected to be rolled out to other markets in the near future.

A DIGITAL STRATEGY THAT APPEALS TO YOUNG PEOPLE

In addition to the vehicle's strong points, the successful launch of XM3 is also due to an effective digital strategy, which above all appealed to a young audience. "All of our communication tools have been developed to reach digital natives" explains Sil Bang, marketing director at RSM. In fact, almost half of the customers are made up of millennials and thirties who are sensitive to trends, new uses and for whom online commerce is natural.

To publicize XM3, a mini website dedicated to the vehicle was for example put online, as was an advertising campaign, a virtual showroom and numerous videos. On the press side, 172 journalists from 142 media published nearly 1,700 content on XM3. Likewise, around thirty bloggers and influencers gave their impressions on social networks.

XM3 was thus placed among the most searched terms on Naver (the Korean Google) in March, and 1,400 pre-orders of the vehicle were made online (almost a quarter of the total). A new record for a car manufacturer in Korea!