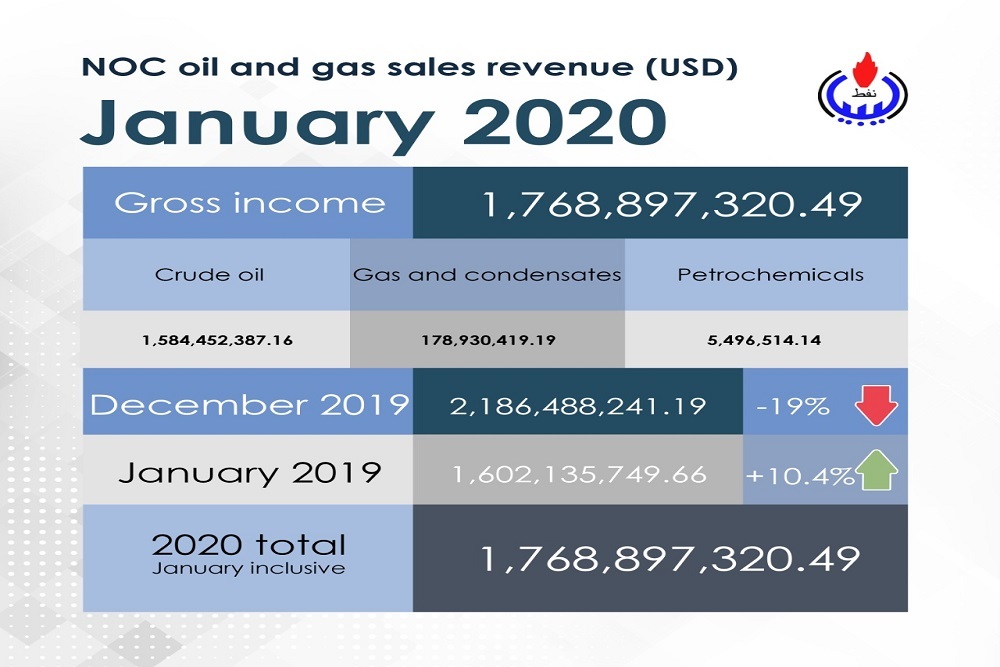 NOC’s revenues come from sales of natural gas, crude oil and assorted derivative products, in addition to taxes and royalties received from concession contracts.  NOC Chairman Eng. Mustafa Sanalla commented: “January’s revenues show a dip from December 2019. However, at nearly 2.2 billion USD, December’s revenues were relatively high. January’s 1.77 billion USD figure was more in line with November’s of around 1.78 billion USD.” He added: “On one hand figures in the last few months have reflected a relatively high oil price, with January’s revenues coming from sales in December at an average of 66.48 per barrel. On the other hand, January’s revenues also reflect some loss of production in December, such as when El Feel field had to be closed due to illegal closures of pipelines. We’ll see this to a much greater degree in February’s revenues, which will reflect the blockades that still continue and have forced us to stop production”.  January’s 10.4% gain in revenues from January 2019 reflects a significant increase in the price of oil since last year. January’s reported revenues come from sales made in December. The average OPEC basket crude oil price in December 2019 was 66.48 USD, up 9.54 USD from December 2018, when it was 56.94 USD.  NOC embraces transparency as one of Corporation’s key values, and has reported monthly revenues dating back to January 2018, setting a standard for other Libyan institutions.    February, 13, 2020  Tripoli Original source: https://noc.ly/index.php/en/new-4/5703-p-in-revenues-in-january-2020-from-%20previous-%20month