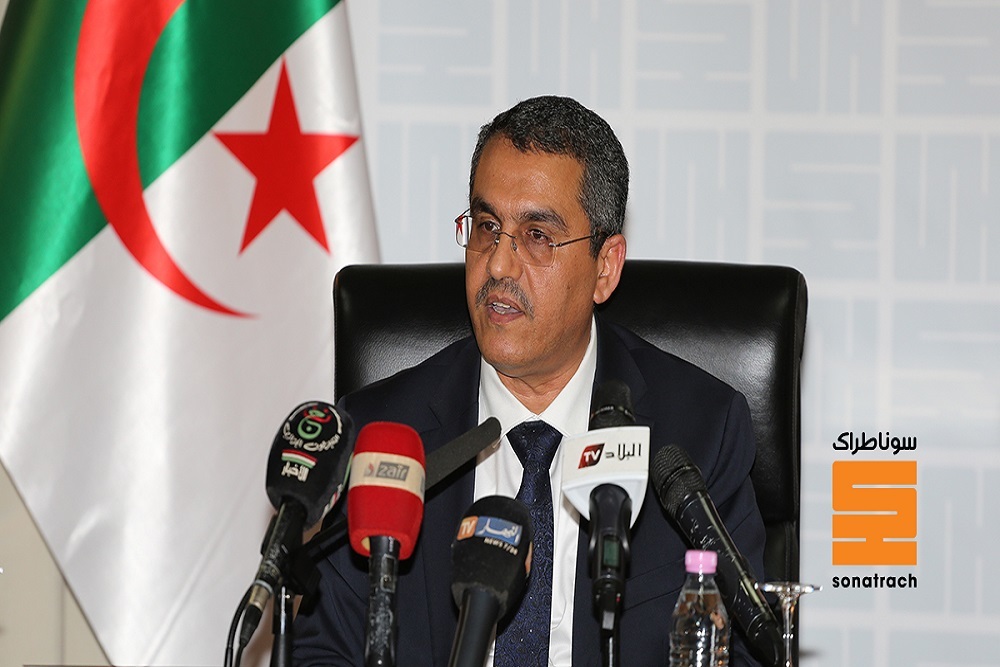 The new Chairman and Chief Executive Officer (CEO) of the SONATRACH Group, Toufik Hakkar presented, Thursday in Algiers, the main lines of the Group's action plan, affirming the commitment of SONATRACH to fulfill its role as an "economic leader" aimed at creating added value and contributing to the diversification of the economy.

Speaking on the occasion of his installation in his new functions at the head of the SONATRACH Group, Mr. Hakkar indicated that “the first mission of SONATRACH is to satisfy the needs of the national market and to contribute to the socio-economic development of country, and that is why the group's responsibility is both great and sensitive, implying a constant renewal of our capacity in favor of the national community, as well through upgrading, enhancing and taking into account constant load of human resources, only through the renewal of our hydrocarbon reserves, declining from year to year.

The first issue concerns human resources through its enhancement as well as the consolidation of relationships and facilitation of communication within the Company, in addition to the enhancement of talents and the promotion and development of the training system, he said. highlighted.

The second challenge defined by Mr. Hakkar consists in establishing the Group as a center of excellence at the local level and as an international leader, so that it is “an international benchmark in the field of hydrocarbons.

According to him, it is also a question of committing to promoting the leading role of SONATRACH through the contribution of its resources and talents to the creation of added value and the construction of a diversified economy, start by promoting the Group's activities and strengthening its downstream and upstream industrial chains.

It is also a question of developing its resources through the popularization and development of the petrochemical and manufacturing industries ”.

As for the third issue, it concerns the widening of the exploration and exploitation perimeters and the multiplication of its operations across our entire national geographic area with all that it contains as offshore and onshore energy deposits.

These factors together will "reassess and review our proven reserves and increase, or even multiply," he said.

Referring to the new Hydrocarbons Law, Mr. Hakkar considered that this constitutional framework is coherent and complementary because it provides the required attractiveness and creates added value, stressing that "it is time to develop our national mining space, all the more that we will work under any obligation under the control and accompaniment of the authority of the State consisting of the institutions and the instances whose place has been reinforced by the new law ”.

The fourth challenge consists in honoring SONATRACH's commitments to the national market to meet its growing needs "without neglecting the commitments made with foreign customers in order to supply them in accordance with the contracts concluded, with the aim of preserving our traditional markets in international level, particularly with regard to natural gas and access to new markets. ”

"This challenge involves a colossal effort and must be supported by constant and precise action to reduce production and operating costs, in addition to drawing up quality development plans which must reduce production costs and deadlines, "he said.

SONATRACH will work, with efficiency and determination, to ensure products and materials extracted from crude with added value and superior making it possible to limit the importation of these products, capable of guaranteeing the country significant resources in currency and creating a developed national industrial fabric.

The President of the Republic, Mr. Abdelmadjid Tebboune had appointed, Wednesday, Mr. Hakkar at the head of SONATRACH to replace Mr. Kamel Eddine Chikhi.

Aged 49, Mr. Hakkar had held several important positions in the hydrocarbons sector, notably that of Vice-President Business Development and Marketing of SONATRACH.

He worked during his professional career in several fields which allowed him to acquire a high level of experience in particular with regard to negotiations for the realization of industrial projects in the field of petrochemistry, in addition to his contribution in the development of the plan Sonatrach's strategic and technical studies of Sonatrach's investment projects as well as contract negotiation and litigation administration.

Mr. Hakkar had an effective contribution to the presentation and explanation of the new Hydrocarbons Law adopted, last November, by the two chambers of Parliament.

Holder of a Master's degree in energy and environmental economics from the Enrico Mattei Higher School in Italy, Mr. Hakkar is also a graduate of the National Institute of Hydrocarbons and Chemistry (INHC) of Boumerdes and holder of a state engineer diploma, specialty petroleum economy. APS

Hydrocarbons: SONATRACH undertakes to fulfill its role as "economic leader"