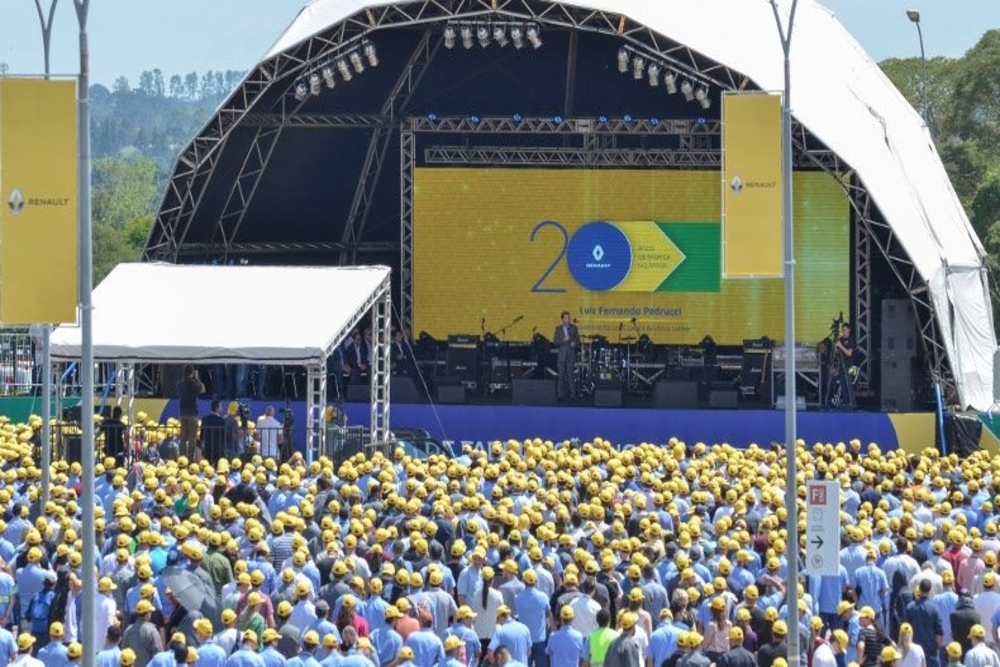 The Renault Group is celebrating its 20th anniversary of industrial presence in Brazil this year. With record market shares, Brazil is a land of opportunity for the Group.

The investments made in the Ayrton Senna complex in Curitiba make it an efficient industrial complex. Today, the site celebrates this anniversary and is pleased with the ranking of the Brazilian magazine Você S./A. who places Renault 8th out of 500 in the list of companies where it is good work!

December 1998, inauguration of the Brazilian production site "Ayrton Senna" in Curitiba, in the south of the country. Spearhead of technological and managerial innovations in Latin America, it is the first car factory to have a water-based paint shop, more respectful of the environment. Also at the cutting edge in terms of management, she plays the "lean production" card, with only four hierarchical levels and small work teams composed of multi-skilled operators. 700 employees at startup. To assemble the Scénic minivan, then Clio, quickly after.

The Group continues to invest in the Curitiba plant despite periods of instability: in 1999 and 2001, the Ayrton Senna Complex expands to accommodate an engine plant and then a light commercial vehicle site.

Today, the Ayrton Senna complex comprises 4 factories in the State of Parana, an Engineering Center and a Design Center, the Group's only center in the Americas.

The plant produces seven vehicles: Captur and Kwid - the absolute leader in its segment, the last two models to expand the range, but also Sandero, Logan, Duster, Duster Oroch and the large van Master.

The vehicles meet the needs of the consumer and this 20th anniversary coincides with a historic record of market share in Brazil.

In total, since 1998, there are 3 million vehicles and 4 million engines produced in the largest country in South America.

The Ayrton Senna complex operates in three teams and has 7,300 employees. The production tool is modern and incorporates the innovations of the 4.0 plant.

The Renault Group is celebrating its 20th anniversary of industrial presence in Brazil this year.

A COMPANY WHERE IT IS GOOD TO WORK!

Another cheering news: the Brazilian magazine Você S./A. Ranked Renault 8th in its list of the 10 best companies in Brazil among the 500 nominees for this challenge.

Douglas Pereira, Director of Human Resources said: "Being among the ten best companies in the country is a great pride for all of Renault Brazil, especially since this ranking is the result of the evaluation of our employees, our biggest asset ".

The Ayrton Senna complex in a few numbers:

1996 : laying of the foundation stone

2010 : Creation of the Renault Institute (Management of Societal and Environmental Initiatives)