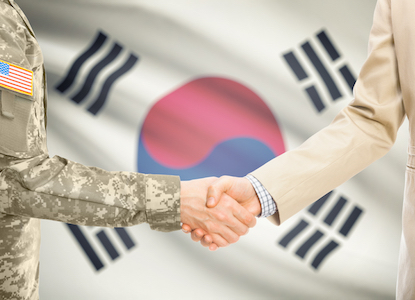 Libyan Prime Minister Ahmed Maetig is calling on the South Korean government to lift a ban on its citizens traveling to Libya.

Libyan officials want South Korean companies to collaborate on energy projects that could help the national economy. One of these projects is a massive set of power plant constructions and expansions; work on the Tripoli West, Sirte Khaleej and Zueitina plants halted in 2014.

Now, amid political instability within Libya, the South Korean government has banned its citizens from traveling there.

Reports from July show Seoul's Foreign Ministry raising travel alerts to Libya and starting to encourage the withdrawal of Korean companies. This follows a 2011 ban that was lifted near the end of the year.

South Korea cites violence between militias in Tripoli as a key security risk.

According to reports in the Libya Herald on Sept. 4, Korean companies are submitting information to the government in hopes of getting some leniency -- and Libyan officials have said that they have provided security forces to visiting Korean firms on prior trips. Still, without some significant red tape being resolved, South Korean businesspeople need to remain content to wait to return to finish some of these infrastructure projects.

Describing South Korea's trade situation, writer and geopolitical activist Ken West said Sept. 8 that South Korea's involvement in North Africa is just one of many indicators of its outsized presence on the global stage as an economic powerhouse.

“This is one of the top 10 economies of the world,” West said. “Do you know how much stuff (America) trades with them?”

As for U.S.-South Korea relations, West said it's partially an alliance built on necessity.

“We’re stuck with them,” West said, describing a delicate balance of power between the United States and China as regional leaders. “If the South retakes the North and the North becomes capitalist, China would be in great fear of that,” West added, citing Chinese worries about the anti-missile system deployed to South Korea by the United States some months ago.

As for the Libyan situation, West suggested it could become worse before it improves. Although Libya’s neighbors have to this point been wary of intervention, instability raises big question marks, not just for South Koreans, but for anyone with interests in the region.

Korea Institute of Science and Technology